Turtle Beach always comes out on top when it comes to high quality gaming headsets. The company has been offering a wide range of gaming headsets that combine high quality sound and premium design into one. The new Turtle Beach X32 is no different either, it continues the legacy of its predecessors. It offers the best audio quality compared to other similarly priced audio-only headphones. Read on our full review to find out all the features of the x32.

The best thing about x32 (at least for us) is the auxiliary input jack present in the wireless module of the headset which gives the user an option to listen to songs and whatnot from a  portable media player or any other device.

Another great feature offered by the x32 is the “Chat boost”, this feature comes in handy when chatting during a game. It enhances and trims the volume of chat in-sync with the ups and downs of gameplay volume. This gives the users a complete automatic way to comfortably chat and listen to the game audio without having to adjust any volume.

The “Sound field” button provides a spatial effect in the audio that’s mostly desired by gamers in certain games. It has three different setting, one is off, second one is medium, and the last one provides the highest spatial effects in game.

The wireless transmission tech of the x32 has been expanded by adding an extra 5.8GHz band. It also has the support for standard 2.4GHz band that’s found in previous models of the headset as well.

The x32 might seem a bit bulky at first and it requires two AAA batteries for power as well but we were surprised to see that wasn’t the case at all because it was almost identical in terms of size and weight to the previous x31 headset. The earcups have a wide breathing space and are comfortable for long term use.

We already know that Turtle Beach never compromises in terms of audio quality and the x32 offers the best audio quality one can find in this price range. The headset sounds natural and the audio is well balanced as well. Stereo effects of the x32 are almost extraordinary and would trick anyone into believing that it’s surround sound. At normal settings, we didn’t find the Bass much detailed but with a single press of the Tone button on the headset, it boosted the bass to a much more deeper and audible level. Another press of the Tone button certainly polished the Treble but that wasn’t something we actually cared much about.

The headphones come with a sound field expander feature which is used to enhance the sound space in some games, specially FPS games. It can help you point out exactly where the enemy is coming from if you know how to convert footsteps into direction, which we clearly don’t and thus ended up getting distracted from the game. Although, some will find this new feature highly helpful and immersive in gaming situations.

We came across a small annoying buzz in the left ear but that wasn’t because of audio performance instead it had to do more with the mediocre wireless transmission. It seemed like the wireless transmission was interfering, somehow with the audio and causing a very minor yet audible buzzing sound in the left earcup. It may not be a big problem but we’re certain that it will annoy a couple of gamers who don’t like any sound interfering with their gameplay. The dual-band Wi-Fi technology doesn’t seem to be working or maybe, it was a problem with the piece we received.

The setting up step was pretty simple and straightforward. By connecting the audio cable and pressing the “pairing” button on the wireless module, after that all we needed to do was press and hold the power button of the headset until the pairing was successful. It was just matter of seconds that both the headset and the console were paired.

As we already mentioned above that the x32 operates on either the 2.4GHz or 5.8GHz bands similar to Wi-Fi routers, so we expected the wireless signal to be really strong and have a decent range but unfortunately it wasn’t what we hoped it would be at all. The connection between the headset and the wireless module was a bit weak. Specially, if you like to move a lot because every time we moved from the transmitter’s line of sight, it would cut the audio for a second or two until it was readjusted and acquired the wireless signal again. We are guessing that you will get 20-25 feet of range from the headset but we’d also recommend staying in the same room.

If you plan to hide the wireless transmitter somewhere in a cabinet then don’t because that will cut the performance of the headset by a wide margin. You’ll get frequent sound cuts and the system will indicated it’s struggling to acquire the signal. We’d recommend you place the transmitter somewhere elevated and in an open space for steady signals and better range for wireless.

The Turtle Beach Ear Force x32 headset is definitely one of the best headsets offered by the company. It carries the company’s highest standard for sound quality and design. It sounds amazing when playing a game or even when listening to music and the ability to add another source of audio input is just incredible. The crispness of the sound and fidelity works flawlessly over wireless transmission. The only thing we complain about regarding the x32 is its inadequate wireless range which leaves us to desire for something better. Still, placing the transmitter in an open and higer place seems to have temporarily solved the problem but we’d like the company to work on better wireless connections. With a price tag of $79, the x32 is definitely bargain in comparison to its rivals in the same price range. 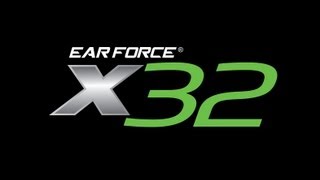